Request an all swim catalogue

Advice On All Our Products

Anywhere in the UK 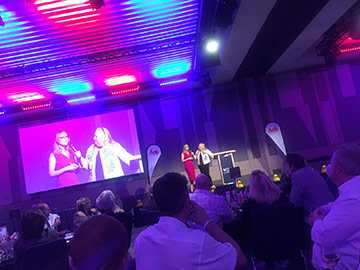 Well, another year is fast approaching an end and it’s time for companies in the Pool and Spa industry to start reflecting on their achievements over the past twelve months and plan for the forthcoming new season. Every company hopes to build on the completion of successful swimming pool and hot tub projects year on year, improve customer service levels and make valued improvements to the overall buying experience. It’s also nice to know that those continued efforts in a business are implemented effectively and that the improvements are recognised by both customers and industry peers alike. No industry awards ceremony reflects those efforts better than the UK Pool & Spa Awards.

Now in it’s seventh year the UK Pool & Spa Awards has continued to grow bigger and better year on year and has seen an overwhelming demand for entrants with 31 award winning opportunities now on offer. The competition is open to the entire water leisure industry across multiple disciplines including swimming pool designers, swimming pool installers, hot tub and swim spa manufacturers together with retailers and wholesalers. Entering these prestigious awards is an opportunity for any company to raise their profile amongst industry leaders and customers alike.

Simply entering these awards isn’t a guarantee of success though. Each entry is judged by both a public and private vote with 40% of the overall vote being cast on-line by the general public and 60% being judged by a specially selected panel consisting of industry representatives and professionals from around the globe. If you’re going to put yourself forward for an award there aren’t many places to hide unfortunately!

So began the anxious wait for the award results at The Vox Conference Centre, Resorts World, Birmingham. As ever, the turnout was impressive with many leading industry figures present including a special guest appearance from Michelle Dewberry, a broadcaster, business woman and winner of the second series of the BBC’s, Apprentice. Our first chance to settle the nerves came with an informal networking session with major suppliers within the swimming pool, swimspa and hot tub industry followed by an introduction to the award entries and the companies looking to take home some awards. The competition was as strong as ever and winning an award was going to be an achievement this year. 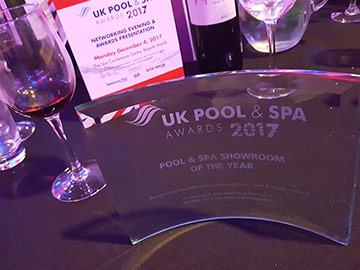 After a few inspirational words from Michelle on the role of technology and young women in business together with an insightful look at the pool and spa industry and the repercussions of the Brexit vote by the UK Pool & Spa Awards event organiser it was time to announce the winners. First awards category and our first entry, Website of the Year. There were some well deserved Business Award winners in this competitive field but we were stunned to be collecting our first win so early in the evening, a Gold Standard Award for the All Swim website. A great start! Next came the Commercial Pool and Project Awards with some stand out winners in the Luxury Pools and Hot Tub and Spa of the Year Awards. Finally, the Prestige Awards and the remainder of our four entries, let’s hope we followed on from our early success. Pool Showroom of the Year was announced as another Gold Standard Award for All Swim, followed by Winner of the Pool and Spa Showroom of the Year and amazingly, 2 more Gold Standard Awards for Pool Retailer of the Year and Spa Retailer of the Year. What an incredible end to an exciting evening of events, an award in every category we entered!

“It’s unbelievable to receive so many awards at the UK Pool & Spa Awards this year, they are always genuinely unexpected as the competition is always very tough. I would just like to thank all of our customers for their continued support and to my team of staff who help make my business a success with their hard work and commitment.”